We have entered a new phase in the SEEtrust/Diepsloot Youth partnership. Instead of Ineke and Paul meeting the youth organisation in Diepsloot itself – with sometimes three people showing up, and then fourteen – they decided in December to change the meeting structure.

Since December the Diepsloot Youth core team meets on a monthly basis with Paul and Ineke at their house in Dainfern. We have been using the first day to work together on their one pager, and are now working together on implementation: SEEtrust in the role of discussion partner and supporting partner, Diepsloot Youth as the initiator, taking responsibility for things to happen.

The Diepsloot Youth organisation has changed their name from Terminator to Youth Developers Community Action Team, in short YD CAT. They have submitted the paperwork to become a legal NPO structure.

Ineke has been speaking at the International Conference on Entrepreneurship at the Business School of Wits University, and at the Yente Women Business Network Forum, organised with SANEC.

She shared SEEtrust’s learnings on what makes partnerships work in fostering the growth of social entrepreneurs working in informal settlements.

Her specific focus was on the partnerships formed within the SEEtrust SA/NL Women Network.

The research, which she did together with Christin Tonne, makes clear that these partnerships can have a tremendous positive impact on the ability of the local social entrepreneurs to grow their organisations: women who have started day care centers for vulnerable children in one of the informal settlements in the Johannesburg-region.  The story of the SEEtrust/Tshepang partnership just goes to prove this point.

In learning what makes the SEEtrust partnerships work, Ineke also touched upon the stumbling blocks she and the partners encounter in making a partnership productive.

At both conferences participants engaged in lively discussions and showed a lot of interest in the SEEtrust Women Network initiative as a model towards growing entrepreneurial ability.

Download the research paper ‘Fostering the Growth of Social Entrepreneurship.

Working on space for Daycares

A critical issue for the women that start and run daycare/community facilities is to have own land and housing. Without this, sustainability and getting funding and sponsorships are very hard to achieve. Most of the women in the SEEtrust network run their programmes on informal land with some containers, or even without having a own space for the children. And it is amazing what they achieve already. Imagine what they could create when they have own land! Just look at the story of Susan Rammekwa and her Tshepang programme: growing immensely over the last 2 years. That is why SEEtrust is putting a lot of energy in supporting these social entrepreneurs to get land and build a home for their programmes. With Angie (Lulamani programme) and Jeanette (Ebuhleni) there seem to be good opportunities now. We hope they materialize soon. To convince decision makers they should decide to make the land available, we asked Leigh Maurtin from Daffonchio Architects to make a first design for the centres. She did a great job, we think …

Posted in Facility Development, WE, Youth Development | Leave a comment 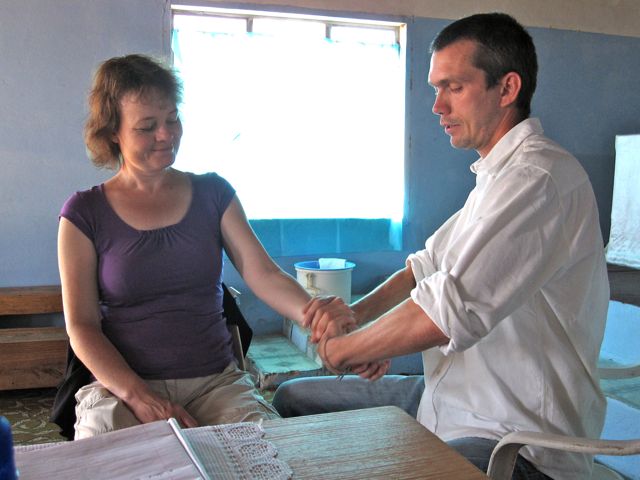 In Sept and Oct, Martijn and Frank are working a month with SEEtrust, volunteering their time and expertise. Their focus is to teach massage techniques that can have a big impact on health and well being of children and adults.They work with the women of the Women network, with the children and also with a group of soccer 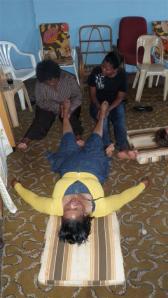 The purpose is to teach them the basics of body functioning, massage, and effective ways to relieve physical, emotional and spiritual blockages. The idea is that they learn it and pass it on to their colleagues. It’s main focus is to help the children but also the people working in the centrers and the people in the townships. Martijn and Frank are planning to visit the different centres for at least two times. Every time more focused on the specific problems.
It is a great help and it is wonderful to see the enthusiasm, relief en benefit these techniques can bring. The ‘shower massage’ is rapidly becoming very popular with the children!

Frank and Martijn are writing a blog on their experiences: http://frankenmartijn.wordpress.com/ 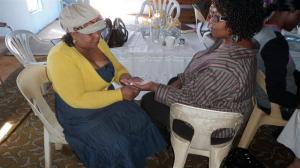 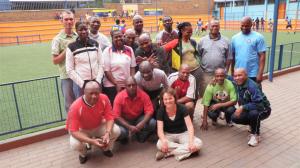 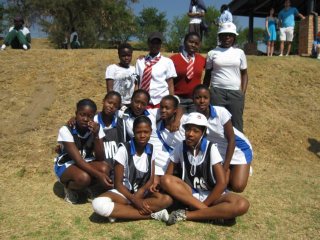 On Sept 17-19, Diepsloot Terminators participated in the St Peter’s College Sports and Arts Festivalan annual high school event in which more than thirty high schools participate: to compete and to meet each other.

Diepsloot brought in a soccer team, a netball team and a debating team. It was a good opportunity to cross borders, to meet young people from other schools and other communities, rich and poor, to interact and play together. It was an exciting competition! On reflection they all agreed that their team work needed improvement.

Although Diepsloot Youth isn’t a high school, St. Peter’s College invited them to participate nevertheless, because they really appreciated the effort the youth made to get their own high schools involved.

Petrus, Gift and Sipho among others from Diepsloot Youth had contacted their own principals and teachers in the prior months to see if their own high school could enroll in the Festival. None of the schools could get themselves organised in time however; and Petrus, Gift and Sipho learned the hard way that without the explicit backing and involvement of adults (like their parents or SEEtrust) most school principals didn’t take them and their initiative seriously.

Diepsloot Terminators is a youth group from the poor area of Diepsloot. This area is known for al the bad things: crime, poverty, unemployment. Terminator wants to send out a different message than we get through the news: the human side of Diepsloot, nice people and nice places, people who  trying to improve their lives, the people who are trying to improve their community. Terminator wants to inspire youth to end their so called cool life style of drinking. drugs, stealing, and change it into a positive lifestyle. Their slogan is:  ‘changing worlds for others’. 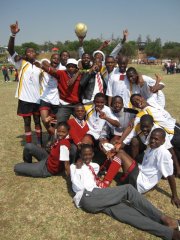 Recently they changed their name from Terminators (which didn’t always convey the right image) to Youth Developers: Community Action Team. In short YD-CAT. Which communicates who they are – Youth Developers – and what they are about: take action in the community to change the world for others. 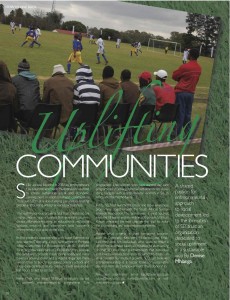 LiveOutLoud magazine published a one page artcile on SEEtrust in their July 2010 issue. In the magazine section ‘How to give back’ SEEtrust and especially the soccer initiative was highlighted.

Mike Eilertsen, founder and director of LiveOutloud, is following SEEtrust from the start and, seeing what is happening in Roodepoort, decided that this development needs exposure and support!

For our development in Roodepoort, we made a short presentation that tells in five slides what we are plannign to create and why. We also updated the budget for the project. Both can be downloaded: