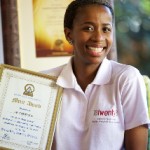 18twenty8 connects young women from the townships with professional women. The ‘big sister’ supports and stimulates the ‘little sister’ to choose a profession that suits her, and to invest in the necessary education.

Refiloe Seseane who until a couple of years ago, starred in the South African soap Generations, has received many awards for her organisation 18twenty8.  As part of a group of most promising young female leaders she also attended a luncheon with Michelle Obama in August. Despite her celebrity status and the appreciation for 18twenty8, is has been difficult for Refiloe to find sufficient financial resources to grow and build her organisation.

This is now changing. During a kick-off brunch on September 3 – organised in collaboration with SEEtrust and Britta Rotmann – a new network has been established: a group of six women has committed themselves to the growth and development of 18twenty8 for at least six months: sponsoring the organisation with R500 a month, and actively participating, as a Big Sister or a consultant.

This entry was posted in Seetrust, WE. Bookmark the permalink.